No products in the cart.

What Everyone Ought to Know about PET PE Bags

With the need for better packaging and storage alternatives increasing worldwide, PET/PE has stepped onto the scene as a go-to option instead of rigid packaging and boxes, especially for storing food. But before we go on, what exactly is this material and how can it cater to different packaging needs? To answer this, we need to take a close look at PET and PE.

PET, short for polyethylene terephthalate, is a popular type of plastic commonly employed in a variety of industries around the world.

It is a strong, clear, lightweight polymer that is widely utilized in the food industry for storage and transportation. PET is also used as storage to inedible materials like liquid soap, shampoos, and window cleaners, just to name a few.

Taking a deeper look at this material, PET at its basic level is formed by a chemical process called esterification. Here, an acid (terephthalic acid) combines with an alcohol (ethylene glycol) at certain defined conditions to form the polyester PET. This material is the most common thermoplastic polymer of the polyester family.

PET has the resin identification number “1”, meaning that it can be recycled repeatedly.

Polyethylene is a popular polymer in the packaging industry and is the most common plastic in use in the world today.

It is available in different forms and is composed of a combination of smaller units (called monomers) of ethylene. PE is classified by its density, with the most common polyethylene types being HDPE, LDPE, and LLDPE.

LLDPE (Linear Low-Density Polyethylene) is defined within a density range of 0.915-0.925g/cm3. It has better tensile strength than the LDPE variant and possesses some favorable qualities like higher impact and puncture
resistance over LDPE. It is popular in the packaging industry and may also be used for cable coverings, toys, buckets, and containers.

LLDPE is useful in film applications due to its unique blend of toughness, flexibility, and relative transparency.

CareClear can be laminated different ways depending what is necessary to the products inside the packaging bag. We can help you navigate the decision regarding which lamination is best from a basic PET/PE, or KPET/PE lamination, to enhanced laminations with EVOH, or PVDC coatings.

With so many options we have a lamination for most demanding applications from retort pouches, to a wide array of shelf stable application from FDA food, to industrial packaging. Printed or un-printed the CareClear material family of PET/PE base plastic is a great solution for products made in China and beyond. Our base CareClear-P PET/PE materials are also an amazingly economical choice in comparison to most suppliers.

PET is made up of recurring units of the monomer ethylene terephthalate.

The hexagonal-shaped object in this structure (called an aromatic ring) gives this polymer its strength and stiffness. This stiffness makes it more resistant to deformation compared to other polymers.

Polyethylene is composed of repeating monomers of ethylene and has a molecular structure that looks like this.

PE is made of non-polar, saturated hydrocarbons with high molecular weight. This quality grants it excellent chemical stability, meaning that it is inert to chemical attacks from strong bases and acids. 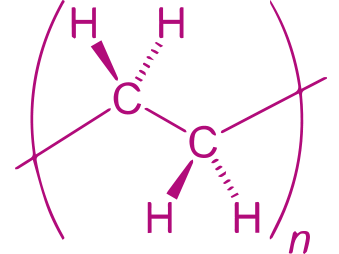 Molecular structure of polyethylene in its most stable form

PET is produced from a simple chemical process called esterification. This process involves the heating of ethylene glycol and terephthalic acid to a molten liquid which can be molded into different shapes depending on the  manufacturer’s specifications.

The two constituents in this process are combined at low vacuum pressure and high temperature, forming long polymer chains. This continues as the mixture thickens, with longer chain polymers being formed. The process is then stopped when the desired chain length is achieved.

PE is produced from the polymerization of ethylene at the right conditions in the presence of a catalyst.

PE film is produced by a process known as “blown film extrusion”. This is a step-by-step process that is used in manufacturing other types of polymers and employs a device called an “extruder” during production.

Why CareClear over other polymers?

PET is favored over other plastics in thin-film applications due to its high mechanical strength. It also possesses superb electrical properties which make it a good substrate for film solar cells and incredibly useful in the manufacture of semiconductors.

PE exhibits good tape adhesion, making it a solid option as a protection in certain applications like waterproofing and painting.

Are you looking for a trustworthy supplier?

With more than 10 years of experience, we offer customized designs with the fastest delivery. Contact our customer service team to know our plastic minimum order quantities.

What Type of Coatings Can Be Applied to CareClear Packaging?

While both polymers boast many impressive features that make them great for various purposes, including storage, PET has limited barrier properties, especially for certain oxygen-sensitive food and drinks.

These properties of PET can be improved by coating it with enhanced barriers like Nylon 6 and vinyl-alcohol. These coatings are applied to one surface of a monolayer polyester structure.

PET laminated to PE (otherwise termed PET/PE film) is a material composed of a PET film laminated with a thin layer of PE film. This material is available in a variety of forms depending on its purpose. Common variations of PET/PE include coatings with EVOH, PVDC (KPET), and haptic coatings like soft touch.

PET/PE film is different from other polymers as it has a terrific blockade against moisture and gases. It is air and water-tight, making it an ideal option as storage bags for perishable goods with limited shelf life.

PET/PE film is commonly employed in the packaging industry. Some of its applications include:

Comparison of CareClear to other barrier materials

PET/PE film is better suited to packaging certain substances over other barriers due to its properties. PET/PE film, which is a double layer barrier, has better optical transparency and is lightweight compared to other barriers like metals.

It is a transparent material that offers an economical clear barrier. It is also chemically inactive and will not interact with your product in any way, even if it's stored for days.

PET/PE can be altered in several ways to produce different variations through the use of coatings. It is FDA-approved and possesses a high contact clarity. The example technical specifications below are for a 3.0 mil PET/PE lamination.

Here is a simple table showing the properties of a 3 mil PET/LLDPE laminated film. Please contact our experts on our website if you didn't find the information you need.

Overwhelmed with all the options?

Get an Instant Quote
Order samples

Get a QUICK quote
Quick Links

Latest From The Blog
Weed Measurements

A guide to the USDA meat stamp

Welcome to Our New Site!

We hope you like the updated look and feel. Be sure to check out our new instant online calculator too

Get an Instant Quote